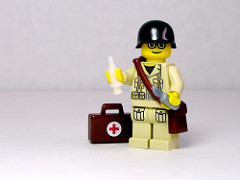 Like many LEGO builders, I spent the first decades of my life building in isolation, lucky to get suggestions or critique from a sibling or rare friend who also played with LEGO. But in the last 10 years — particularly the last 5 — the LEGO fan community has grown to include a critical mass of people who build in just about every possible genre.

People with shared interests who spend time together online will inevitably run out of solely positive things to say, and as a result, a culture of constructive criticism has emerged among LEGO fans. Balanced against this impetus to critique everything are the planning and research that individual builders put into what they create. In contrast to the solo building those of us in our 30s did 20 years ago, builders today have a wealth of sources right at our fingertips.

What effects do research, critique, and discussion among community members ultimately have on the quality of the LEGO creations we build and share? Since I’ve been on a bit of a building spree lately (amazing what you can do when your LEGO collection is sorted), I thought I’d step back and share my experience.

Read on, and share your own thoughts in the comments…

Before I set out to create a Dodge WC54 ambulance from World War II, I spent a couple hours finding the best pictures and determining where and when they were actually used during the war. Given that many World War II photos were taken by service personnel and are therefore in the public domain, Wikimedia Commons is a great place to find historical photos.

Historical re-enactors and scale modelers also run dozens of sites that pull together vast amounts of careful research. For both my ambulance and later battalion aid station diorama, I turned frequently to the WW2 US Medical Research Centre.

Originally planning to broaden my D-Day beachhead diorama, I confirmed that WC54s were used at Normandy, and even found a photo of WC54s sitting on Omaha Beach. Good enough to start building.

Targeting 1/35 scale, I translating the real vehicle’s length, height, and width into studs and bricks. Remembering what I’d learned from my wildland fire engine, I built from the top down. I struggled with the front, since I had to combine half-stud offset for the three/five-wide hood with SNOT for the grill and bumper, plus tiles (with no studs to sturdy connections on top) for the fenders.

I figured it out, though, and pleased with my results posted pictures to Flickr: 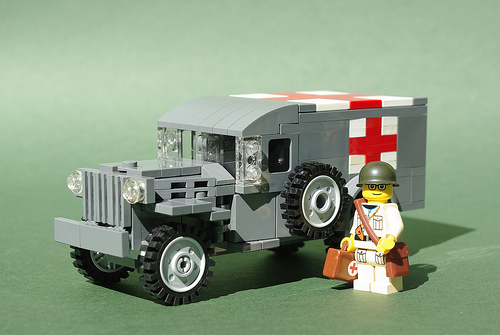 Checking back a while later, I saw a stream of notes from our very own Tim, whose windscreen I’d reverse-engineered for the original ambulance. I gritted my teeth and clicked through. (Honestly, I hate taking criticism, especially when it’s wrong. I’d vented a week earlier that too many of the suggestions to “improve” my M4 Sherman tank took it in more interesting but less historically accurate directions. That’s just plain annoying.)

Tim had seen the mini-rant I’d posted in a Flickr group we both frequent, and his critique was spot on. He made specific suggestions based on the source material I’d used myself, providing solutions where I hadn’t thought the model could be improved. The result is the version I included in my diorama, posted separately below: 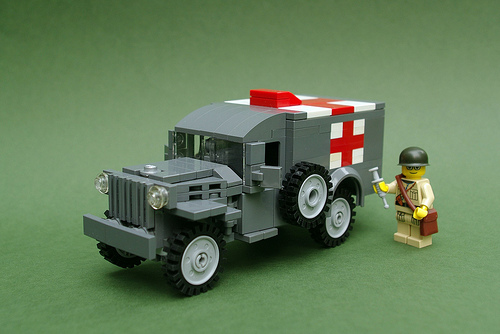 The story arc (if you will) started with research, moved through community discussion and critique of the creation itself, and ended with a substantially improved LEGO model. This same story plays out every day in the LEGO fan community today — something that would have been nearly impossible 20 years ago and highly unlikely 10 years ago.

by George Bradford. I was pleased to discover that I ended up almost 100% to scale (1/35) for my M3 Half-track, even without the book. 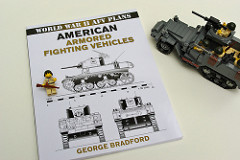 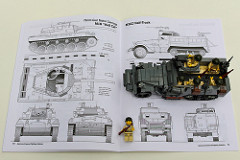 Nearly all of the book’s schematics are printed at 1/35 scale, which avoids eyestrain from the WIP-held-against-computer-screen method I’d been using before the book arrived in the mail.

So, what’s your experience with the balance between research or sources of inspiration and constructive criticism?

6 comments on “The roles of research, critique, and community in improving LEGO models”