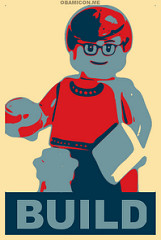 Merriam-Webster defines the act of plagiarism as:

to steal and pass off (the ideas or words of another) as one’s own : [to] use (another’s production) without crediting the source.

Unfortunately, plagiarism is something we LEGO fans witness all too often online. “Hey, some kid on LEGO.com stole my photo and entered it in a contest. And he won!” or “There’s this scumbag on eBay selling copies of a MOC that I designed!”

I think we can all agree that stealing photos or selling someone else’s design for profit are both damaging to the legitimacy of LEGO as an artform and to LEGO builders as a community.

(Some good news is that the Brick-Busters are doing a good job of dealing with the kids on LEGO.com, though the problem is much broader than their scope.)

However, accusations of plagiarism seem just as common between LEGO builders. “Dude, aren’t you going to credit me for combining these three pieces in this particular way?” or “Here’s a photo of an awesome technique I just thought up. I call it SNOT. Please credit me if you use it.”

I believe that claiming ownership or requesting credit for building techniques can have a stifling effect on the creativity we all value so much, and therefore doing so can be just as damaging — in different ways — as real plagiarism. I’m proposing that we embrace a more open approach to building techniques by abandoning the possessive attitude too many of us have about the way we’ve put a few LEGO bricks together.

Of course, what I’m suggesting as it applies to LEGO isn’t unique either. Open source software has proved competitive with traditional boxed products. An increasing number of writers are embracing “copyleft” and open content philosophies as alternatives to traditional copyright.

Boing Boing contributor and science fiction author Cory Doctorow releases his work under a Creative Commons license — specifically, the same license under which The Brothers Brick releases our original content. (All of my own LEGO photos on Flickr are also posted with the same CC license.)

What I love about LEGO builders as a community is how collaborative we are. In most cases, someone who finds what they consider a new type of connection or an innovative use for a part shares it with their LEGO friends expecting nothing in return. It might be easy to dismiss my earlier examples as coming only from the sticky typing fingers of the pre-teens and early teens crawling all over Flickr these days, but I read those kinds of comments from adults all too frequently too.

This attitude is self-congratulatory at best, and has the danger of stifling others’ creativity. Before I had my “open LEGO” epiphany, there was more than one occasion when I paused while building to think whether I wanted to bother listing in my photo description later all the potential places where I might have first seen the technique I was using.

In a creative medium that values collaboration and innovation, I don’t believe claims of ownership for building techniques have any place.

What do you think? Are these claims just annoying, or worse? Sound off in the comments.

44 comments on “No, it is *not* your technique – it’s time for “open source” LEGO design [Editorial]”