As I said in my last post, I’m using today’s snow day to build and search for creations to blog. I didn’t find too much stuff to blog that hadn’t already been covered by my Brothers-Brick cohorts, but I’m hopeful that the snow on the East coast of the US will force a building boom. And so, I give you the Contus Lancer Corvette, which I’m still not sure if I like.

This ship is meant to be a long-range attack craft. It’s armed with a single, massive, spinal mounted energy cannon, for attacking capital ships, and bunch of crazy-spindly sensors. For most of this build, I thought it was going to end up being unmanned, because I didn’t think I’d have room for a cockpit. Eventually it dawned on me that my idea for the front section could easily be hollow, and now there’s a pilot. 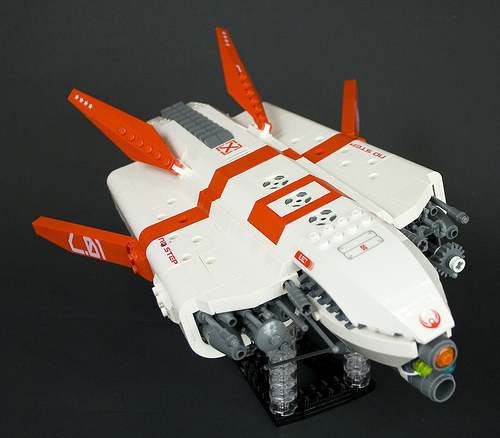