I was recently fortunate enough to be allowed into the LEGOLAND California Model Shop, and wandered around with Master Model Designer Gary McIntire for over an hour of total LEGO geeking out. I hope you folks will find it as interesting as I did, though be forewarned: it may be the nerdiest interview you’ve ever read.

The Brothers Brick: So Gary, what do you do here?
Gary McIntire: I make magic happen. (laughs) I do repairs around LEGOLAND, give VIP tours, media events, Make-A-Wish Foundation tours, park events, ambassador classes, and judge junior master model builder events. When I’m not doing those things, I redesign, reconstruct and replace models around the park. I also do the design and building of smaller models, though larger design projects go to an off-site design shop. It all used to be done in one shop, but we split into separate maintenance and design shops over a year ago.

TBB: What makes maintenance here at LEGOLAND California different from the other LEGOLAND parks?
GM: The other parks in Europe are closed during the winter and can cover and completely refurbish their models during the off-season when they’re closed, which also serves to protect the models from the elements. Here we’re open year round, except Tuesdays and Wednesdays during the winter, so repairs are intermittent and the models are exposed to sun and guests throughout the year. 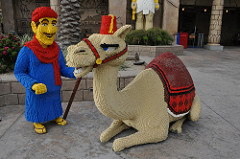 TBB: What’s the life cycle of a typical model in the park?
GM: It depends on the location, which will affect how much sun exposure and guest contact it has. It can be as long as 10 years without problems if they’re inside buildings or in the shade. But if it’s in the sun and people can climb on it, it may need to be refurbished within 2 years, with a complete replacement in another 2 years. If you want to see something that’s about at the stage where it needs to be refurbished after 2 years, take a look at the camel in Land of Adventure (pictured on right). The feet and neck get stepped on so kids can climb it to have their picture taken. On other models, major extrusions are likely to get knocked off, so that makes the need for refurbishment more frequent.

TBB: What about in Miniland?
GM: The District of Columbia section (pictured below) has already been refurbished twice and is due for a complete overhaul soon. But San Francisco, because it’s north-facing, has never been refurbished. 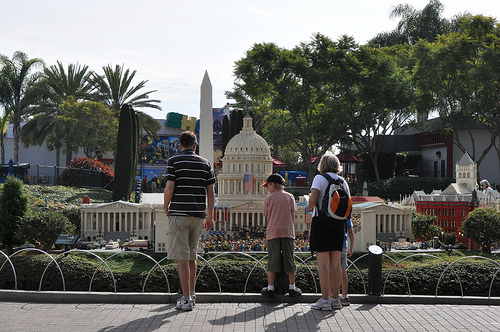 TBB: About how much of your time do you spend on Miniland and how much on the other larger models in the park?
GM: About fifty-fifty.

TBB: How many other people work here in the Model Shop with you?
GM: My boss, me, and a half time person, Ed Dowling, who is called a “Miniland Resetter” who just comes in on weekday mornings to make minor repairs to Miniland. Miniland figures near the edge of exhibits that get knocked over, that sort of thing. We also work with Mike Dibble and Denis Wauchope (pictured below) who are in charge of Miniland animation. They’re in the room next door making sure the cars, boats and trains keep moving. 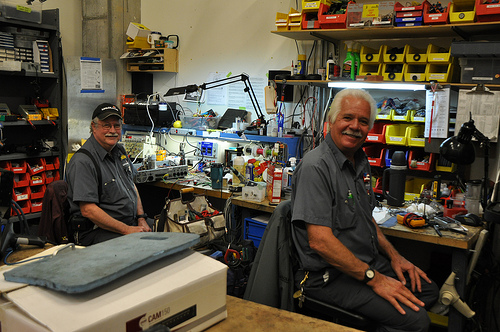 TBB: Where do you get all your LEGO and what do you use the most?
GM: We use a lot of different pieces, though mostly basic brick and plate. In addition to what we already have in the shop, we have overflow brick and plate in storage. We reorder basic elements as we need it or when we run out because of larger projects. When we reorder, it’s straight from Billund, though for some rush orders, we’ll get in touch with the Model Shops at the other LEGOLAND parks. In fact, we just made a request from Windsor. In addition to the basic brick and plate, a very few minifig elements, some DUPLO, no BIONICLE, and a little bit of TECHNIC. We avoid using super-specialized elements. As a LEGO fan before I started working here, I kind of know the available pieces, so if we don’t have something, but I know it’s out there, I know to order it.

TBB: Do you have access to any elements that the general public doesn’t?
GM: Officially, no. The closest thing is a 1×1 round brick that has different sized holes at the top and bottom, that is the exception. We use it for lampposts, with a metal rod on the inside. We also have a catalog of “Q” elements that aren’t in current production, but are available for LEGOLAND, like the 1×1 round plate in green, and some basic elements that come and go from sets. We especially use slopes, basic specialty pieces, rounds and clips in a variety of colors. There are a lot of things that we have in stock, but we use so rarely that we don’t have to reorder. Some of those are out of production and if we run out, it’s done. 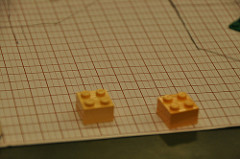 TBB: What about colors?
GM: The only colors that we have that aren’t generally available are “skin” and “peach,” which we use for Miniland figure faces, hands, and legs as well as a very few busts of real people or other similar projects. There’s another color that was specially made for a large project at Windsor, which is a sort of glittery milky color for the exterior of a major new sports complex. Maybe Wimbledon? Usually the only time there will be a totally new color is for high profile builds that require a nonexistent color.

In part 2 of the interview, we discuss installation design and tools of the trade.

1 comment on “Behind the scenes at the LEGOLAND California Model Shop: an interview with Gary McIntire [part 1]”