This is very old news for some of you, but I just realized that we never blogged the breakthrough discovery of a way to restore the original color of yellowed LEGO bricks.

LEGO fans have discussed this problem for years, even concluding (correctly) that ultraviolet light can contribute to faster yellowing of colors like white, blue, and old light gray (some of the key colors of Classic Space sets). Fans like sugegasa have experimented with the effects of sunlight on the new grays, but nobody could quite figure out how to reverse the effect on older, yellowed bricks.

That is, until now. The same problem apparently happens with other ABS products, such as the casing on older computers and video game consoles. A group of gamers over at Retr0Bright have proved conclusively that the original color of yellowed ABS can be restored by using hydrogen peroxide.

Tim Goddard gave it a try on his yellowed LEGO bricks. 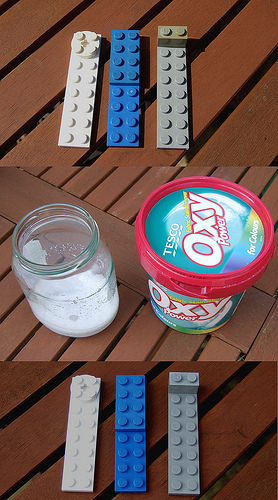 Success! In brief, the problem isn’t dirt so much as a chemical reaction in the visible surface layer of the ABS plastic itself, caused by UV rays in sunlight. Immersing the LEGO bricks in a hydrogen peroxide solution permeates the surface and reverses that chemical change.

Learn how to get those Classic Space sets looking like new again at Retr0Bright.