I returned home from BrickFair last night at about midnight. It was a crazy fun blast. Photos from the event are starting to pop up on BrickShelf and Flickr. 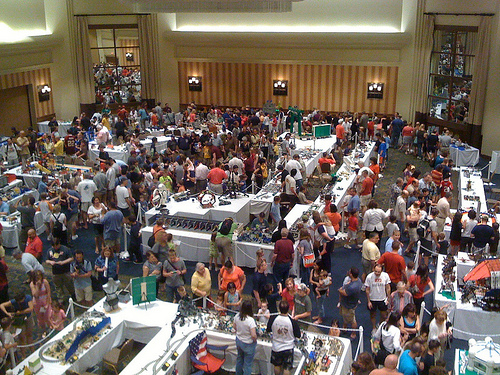 As you can see above, there was a pretty huge turnout from the public as well. I gather that the total number between the two days was between eight and nine thousand people. That’s a lot to be crammed into a hotel ballroom. Fortunately, next year, BrickFair is moving to a real expo center. I’m psyched about all of the space (Space!).

I tried to take photos of the “impaired” speed build competition, but the lights were turned down in order to make things more difficult. If you ever have the opportunity to watch a bunch of drunk LEGO fans (all of legal drinking age, of course) trying to assemble a gear train in the dark, on a multi-colored tablecloth, I highly recommend it.

There were also some pretty epic creations on display at the show. I’m pretty sure that some may have even debuted there. There were definitely a few that I hadn’t seen on the internet. I enjoyed Chris Edward’s “ArchipeLEGO“, which he has posted as separate islands here. Another highlight was Brickistan, a middle-eastern castle diorama that was chock full of detail, and hard to find photos of. A friend and I also had a pretty big creation up our sleeves for the convention, but we haven’t gotten the photos ready to post yet.