We weren’t going to dignify this attack on BrickArms by posting it here, but we have been getting a flood of emails concerning it. So, here it is.

In the December 4th edition of the UK-based SUN, this article appeared. 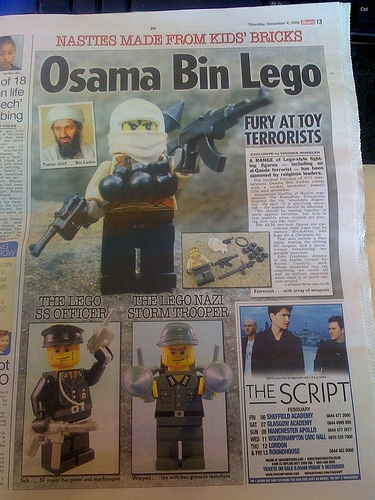 The full text is as follows:

A RANGE of Lego-style fighting figures — including an al-Qaeda terrorist — has been slammed by religious leaders.

He said: “It is glorifying terrorism — the makers should be ashamed.

“We should be coming together to unite against terrorism, but how is that possible when children are playing with toys like this?”

The £9.50 two-inch figures are customised from Lego toys by makers BrickArms, who hope for a Christmas hit.

They also include a Nazi major, bearing the chilling SS insignia, and a stormtrooper brandishing two grenade launchers.

Edie Friedman, director of the Jewish Council for Racial Equality, said: “These distasteful toys are something we could all well do without, especially when there is so much tension around.”

LEGO UK today issued a statement saying it is not associated with the toys being sold by BrickArms which have been customised without its knowledge or permission.

It continued: “BrickArms is not licensed by LEGO UK to customise LEGO figures and has no links to the LEGO brand.

“LEGO UK is committed to developing toys which enrich childhood by encouraging imaginative and creative play – and does not endorse products that do not fit with this philosophy.”

Fox News, among other news sites, picked up the story. The only significant difference was that Fox contacted Will Chapman, owner of BrickArms. He was quoted as saying:

“We do not sell an ‘Osama bin Laden’ miniature figure. We sell a generic bad guy minifigure with a Ninja scarf head wrap, the same minifigure that we have been selling for over a year now, with no associated ‘outrage.'”

“It does not represent anything; it is simply a bandit — a bad guy for the good guys to battle. Attempt to assign it a ‘personality’ only serves to create controversy that does not exist.”

The article has sparked much indignation throughout the Lego Fan community. The overwhelming majority supports Will and BrickArms.

I personally believe that this spurious attack, by a disreputable tabloid, was merely to stir up trouble. Their pathetic attack on one of our own is aggravating, to say the least.

The Brothers Brick has an extremely positive and long-standing relationship with Will. He and his family are wonderful people. We firmly stand with him, his family, and his associates. Go BrickArms!

105 comments on “BrickArms under attack in recent Sun edition [Editorial]”