BrickCon 2008 begins this Thursday! When I announced prizes and giveaways for the Zombie Apocafest, I realized we needed a good way to repel the zombie menace.

What better way to fend of that flesh-eating horde than with a special set of weapons designed for just that purpose from BrickArms? 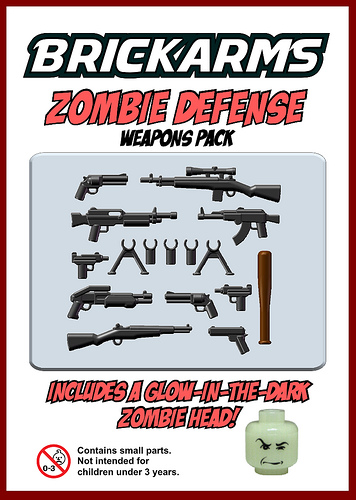 In addition to the other prizes and giveaways, BrickArms and The Brothers Brick will be handing out new Zombie Defense Weapons Packs to everyone who contributes a building or vehicle to the Zombie Apocafest display. That’s right: BrickArms for free!

The weapons pack is full of the tools of the zombie-hunting trade:

If you don’t have time to build something for the display, you’ll be able to buy your very own Zombie Defense Weapons Pack at the BrickArms table. And if you can’t make it in person, BrickArms will be making these available through the re-launched BrickArms.com.

Well, I’m off to finish up my final building for the display and begin creating the horde itself… :D