Warning: This is an opinion piece, and may not reflect the opinions of my co-bloggers, The LEGO Company, or custom-accessory producers (whose products appear here for illustration purposes only). This post may also include external links to opinions and facts you may not agree with, so read the whole post and share your own thoughts in a comment.

We feature so many LEGO military creations here on The Brothers Brick that all those fighters, battle dioramas, and tanks have their own category. There’s also a lively discussion going on among commenters in the LEGO City 2010 post. Between Independence Day last Friday here in the United States, my own pacifist upbringing, and this recent discussion, I’ve been giving some serious thought to the convergence of LEGO bricks and the military, and the differences between realistic and fantasy violence. 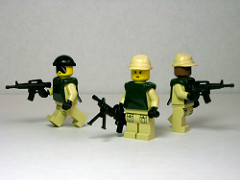 I myself have built plenty of LEGO military creations, most frequently to illustrate the most accurate historical use for custom accessories I’m reviewing. I’ll also admit that like many males, I have a strong fascination with things that go “Boom!”

In responses to questions from Gizmodo readers, here’s what a LEGO Company representative said recently:

Q: Are there any chances that Lego will ever start producing modern day warfare Lego, with tanks and helicopters and what not?
A: We have a strict policy regarding military models, and therefore, we do not produce tanks, helicopters, etc. While we always support the men and women who serve their country, we prefer to keep the play experiences we provide for children in the realm of fantasy.

Some LEGO fans argue that LEGO has, in fact, released military-themed sets in the past:

And of course, there have been elements of conflict throughout many of LEGO’s themes, going all the way back to the earliest police and castle sets of the 1970s. More recently, LEGO has even included realistic-looking guns in Wild West, Star Wars, Batman, Indiana Jones, and other themes.

This leads to the obvious question from another Gizmodo reader:

Q: Why did they changed the founders rule to never make gun like elements?
A: The company still has a no gun policy when it comes to realistic or military play scenarios. However, in order to stay true to the strong licensed properties we incorporate to the Lego portfolio, we need to stay true to those properties and sometimes that involves including weapons. In our own play themes, some element of good vs. bad conflict is typically considered to provide for role play opportunities. In those instances, the setting is very clearly a fantasy world.

The distinction makes sense to me. Most 10-year-olds aren’t going to mistake a set that includes dinosaurs and a four-wheeler with a lightly-armored Humvee avoiding improvised explosive devices. Similarly, dwarves fighting goblins, the undead, or even each other are unlikely to evoke images of coalition forces putting down the insurgency in Fallujah.

If LEGO were to create sets based on the military, that begs the question, “Which military?” LEGO is a global company. If they were to design military sets, which countries should be represented? Royal Danish Jægerkorpset (special forces) or HDMS Absalon? American A-10 Thunderbolt (with depleted uranium flick-fire action!) and M1 Abrams tank? Russian R-36 ICBM (with pop-out MIRV warhead action!) and Sukhoi Su-27? 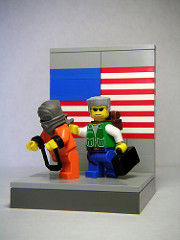 Or perhaps LEGO could take its inspiration from the military history of the past 100 years. Would you buy an Allied flamethrower set, with Okinawan civilian minifigs in caves ($29.99), or a Dresden Firebombing playset with limited-edition Kurt Vonnegut minifig ($49.99)? Modular Hanoi Hilton and Ho Chi Minh’s bunker? Something from the War on Terror, perhaps: An Al-Quada training camp set with Osama bin Laden minifig, camouflaged Navy SEAL, and inbound cruise missile ($19.99) or extraordinary rendition set with unmarked CIA jet, compliant third-world diplomat, and abducted French-Algerian shopkeeper ($39.99)?

How about a LEGO Third Reich theme, with an impulse-purchase Adolph Hitler for $2.99 and a LEGO Auschwitz for $89.99?

Ultimately, the job of every military is to conduct war (whether defensive or offensive), and I believe that war is wrong. There are those in every government who would have its citizens believe that the lives of people who don’t look like us, live somewhere outside our borders, or don’t believe the same things we do are somehow less valuable than our own. And therefore, it’s okay to kill our fellow human beings to achieve the political goals of these leaders.

Applying this philosophy to my LEGO hobby, I don’t believe LEGO sets that depict realistic or modern military themes — including soldiers, military vehicles, and historical conflicts — are appropriate for children ages 5 to 12. Other toy companies certainly don’t agree, taking advantage of patriotic fervor and every boy’s fascination with guns. And yet, this is one of the very reasons I respect LEGO and their no-military policy. They stand apart from the rest.

On a more practical level, LEGO’s largest market is Germany, a country whose 20th-century history has left many modern Germans without much of a taste for war. LEGO is also a global company. As my somewhat outlandish list of potential military sets illustrated, how could LEGO possibly choose which countries to represent? 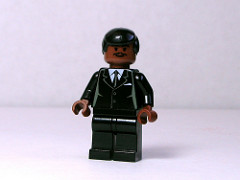 I’m probably not going to convince many of you that pacifism or nonviolence is always the most appropriate political response, but I hope that I’ve made you think, and that perhaps some of you can understand why I personally hope that The LEGO Company never changes its no-military policy.

Thanks for reading. Without further ado, sound off in the comments and vote your conscience in the new poll.