This is the 500th post here on The Brothers Brick. Woo hoo! Last month, on July 24, this blog also celebrated its first birthday. Yee haw! (And a happy birthday to pootling today!) Let the long-winded, self-satisfied retrospective post begin…

A lot has changed in the LEGO blogosphere since my first post. When I launched “Dunechaser’s Blocklog,” as it was called back then, I was following the lead of bloggers like Bruce (of VignetteBricks), Jon Palmer (of Zemi.net), and Azumu (of LEGO-BINGO). A year ago, I could count the number of LEGO blogs I knew of on my fingers.

Today, there are over a hundred LEGO blogs in both English and Japanese, with an increasing number of blogs in other languages. Most blogs focus on a particular theme, with MINDSTORMS NXT a very popular subject (traffic to The NXT STEP absolutely dwarfs traffic to this blog). It sometimes seems like I run across a new blog just about every day. The number of blog posts Technorati has tracked that include the word “LEGO” should give you some indication of just how much the LEGO blogosphere has grown in the last year: 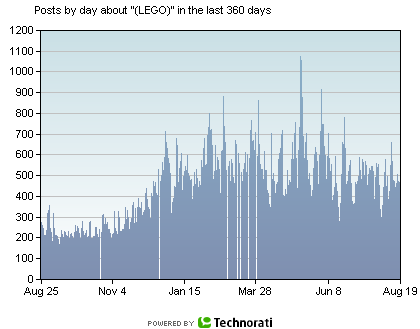 The online LEGO community as a whole seems to have changed somewhat over the last year. Although LUGNET, Brickshelf, and forum memberships continue to grow, I sense a shift toward blogging and Flickr (which itself includes many community features).

This blog has also grown substantially. I started out just planning to use my blog to feature my own creations but I quickly started featuring minifigs from other builders. I posted once or twice a week, and both comments and incoming links were rare. I installed StatCounter last December and was surprised to find that there were actually people reading my blog! When my Aztec gods were featured on Boing Boing, traffic spiked dramatically:

The Boing Boing spike hides a slow, steady growth in readership over the last eight months, especially in the number of regular, returning readers (the orange part of the graph):

As I started to post more creations from other builders and began finding and linking to other blogs, many bloggers returned the favor (along with an increasing number of non-LEGO blogs). And as I added more content and the links increased my Google page rank (4, according to PRChecker.info), people began finding this blog in both keyword and image searches: 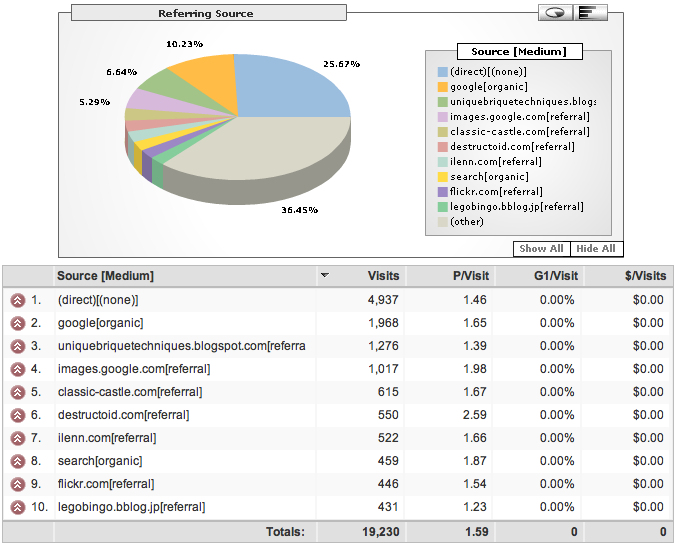 Readers arrive here from other blogs (Unique Brique Techniques is the top referring LEGO blog), Technorati, search engines (mainly Google), and of course the forums where I post regularly. On any given day, about 250 to 300 of you who visit The Brothers Brick, from all over the world (this doesn’t include those of you reading posts in RSS/Atom feed readers and aggregators like ILENN): 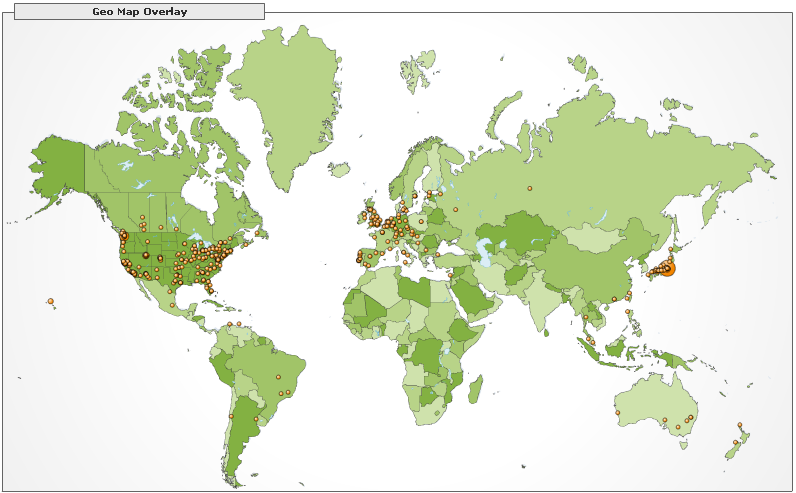 On one hand, it makes me very proud that my little LEGO blog has found a measure of success, but on the other hand, it’s very humbling (and a bit overwhelming) to know that so many people rely on The Brothers Brick for their daily LEGO fix.

I don’t know what the LEGO blogosphere or The Brothers Brick will look like in another year, but it’s been an absolute blast finding and featuring so many cool LEGO creations. Builders, keep building great stuff. And readers, thanks for all your support!