With looming deadlines and a mountain of work, it’s been a pretty rough week at the office, so I wasn’t looking forward to a four-hour training course on how to conduct customer visits. My day picked up immediately when I saw a big tub of basic bricks on the conference room table.

After a brief overview of the topic, we were divided into teams of three — one “user” plus a note-taker and observer who “worked for LEGO.” Naturally, I wanted to be a user so I could get paid to build! The user was supposed to perform a task: To recreate their living room with the available bricks. Being the sorty sort that I am, I quickly had the bricks sorted by color, telling the observer that I wasn’t happy that my “product” also included some knock-off parts (Mega Bloks, ugh).

Given ten minutes and parts limitations, all while talking through my process, I was fairly pleased with my sorta-kinda vignette (photos by my quick-thinking office-mate, Crystal, who said, “Oh, you should blog this tonight!”): 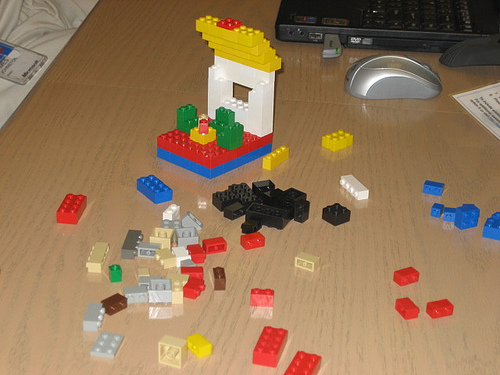 Kate, my manager’s manager and one of the other “users,” had this to say about my creation: “Overachiever.” Hee hee.

Here’s another living room, by Ilana: 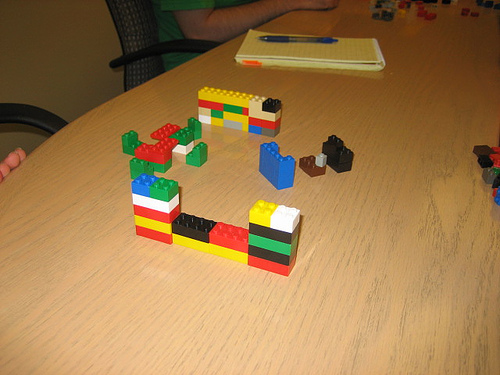 I like her entertainment center, couch, and coffee table. The multi-colored stacks of bricks also work surprisingly well as bookcases. Both Ilana and I kept playing with the LEGO throughout the rest of the meeting. Ilana ended up with a three-foot-tall rainbow thingy and I had a bunch of geometric objects of various shapes and sizes.

After we finished our living rooms, the observers and note-takers presented their findings, writing up a “sequence” of each user’s actions: 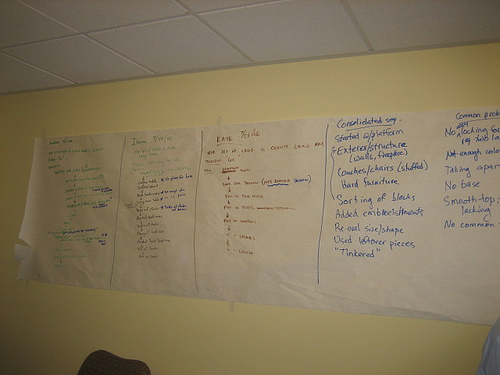 Along the way, the group collected various data points or “factoids” about what the users said and did, which we then organized into related sets using a process called “affinity grouping”: 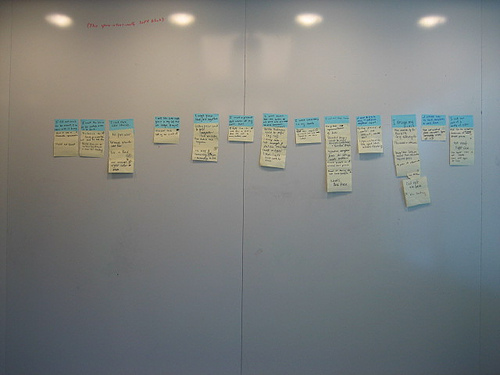 (If you want to read what a bunch of geeks had to say about playing with LEGO, see the full-size versions of picture 1, picture 2, and picture 3.)

Not nearly as fun as free-building at home, but hey, it beats a meeting any day. ;-)