In the last few years, I have been building a range of LEGO minifigure-scale missiles and missile launchers. They range from cruise missiles launchers to ICBMs. My latest model is a so-called TELAR, part of the Soviet surface-to-air missile system called “Buk” (Russian: “Бук”; English “beech”). NATO calls it the SA-11 “Gadfly”. Soviet military doctrine emphasized integration between ground forces and their air defenses. Because of this, many Soviet surface-to-air missile systems used tracked vehicles, so that they could move together with the ground forces. 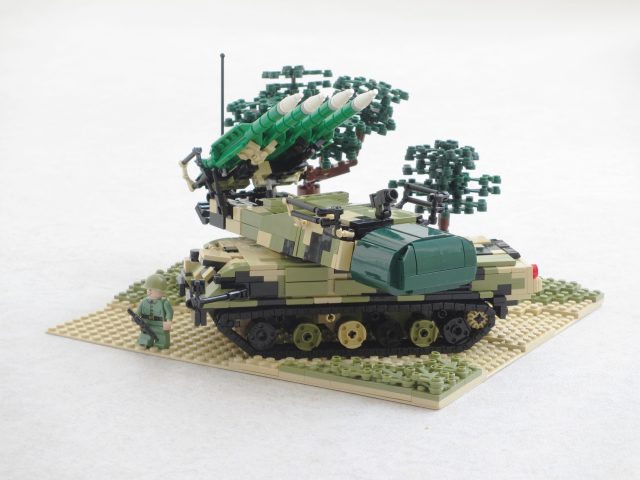 TELAR stands for a transporter-erector-launcher and radar. The name covers what it does quite nicely. The Buk TELAR carries four missiles on top of its turret, on rails that can be erected before launch. It has its own missile guidance radar in a dome at the front of its turret. The crew sits inside the armored hull below. Usually, such TELARs operate together with a few others, as well as a command post and a surveillance radar, which also are tracked vehicles. But, because it has its own radar, it can also operate on its own. Like most of my LEGO builds, it is not actually all that tough, though. It is only tough in the sense of that I found building a minifigure scale armored and tracked vehicle tough going. So, my hat is off to all of you out there who build minifigure-scale armor.  This is one of the first times I have done it and I really struggled to keep it small enough. I wanted the scale to look right with the minifigure soldier next standing next to it. As a result, there is so little space inside that I could only fit a driver.  And, like most of my builds, the model is actually quite flimsy. In fact, none of my models from the last ten years or so would ever be suitable as a child’s toy, even those that aren’t weapons of war. However, I do like the end result; it is a unique addition to my collection.