Ready to build something awesome this weekend? To inspire you with some new building techniques you may not have thought of on your own, here’s an in-depth article about the unique 3.18 mm connections available throughout the LEGO System of play. This article by Tim Johnson originally appeared on New Elementary.

I am sure that many people, upon seeing these models, would cite them as proof that LEGO® have lost their way “since I was a kid, when it was just bricks“. Whilst these are indeed new parts, the fact is that the changes that brought them into the LEGO System occurred in the 1970s. 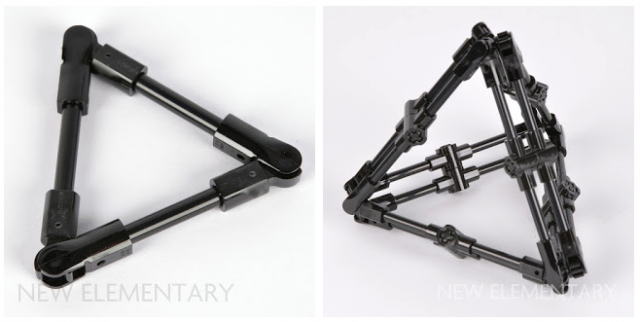 These lovely geometric experiments were built by Huw Millington for our parts festival, The New Black, and I have saved them until last. When choosing parts to include in The New Black I didn’t only go by colour; I also strove to include many parts from the family that contain connection points based on the 3.18mm diameter such as bars, and the clips and holes that grip them. Huw’s models use the hinge joint created with parts 23443 and 11090 and then, to connect multiple triangles together, he used another part selected for The New Black; the Technic axle connector with two projecting holes that can receive a bar (Design ID 24122).

They are all useful, small LEGO elements that have no stud connections. Many people still imagine that the LEGO System only connects via the studs and the antistuds but of course the System has developed a long way beyond this over the course many decades. One of the ‘connection families’ (I just made that name up) I have examined in the past are the 5.9mm ball and cup connectors, first used in the Chima Legend Beasts and the Mixels, which were introduced to satisfy the need for poseable joints in smaller models.

So how – and why – did the ‘3.18 connection family’ enter the LEGO System at all? To find out, I looked back through the history of LEGO parts. This article would not have been possible without the wonderful contributors to BrickLink.

To discover where this seemingly arbitrary measurement of 3.18mm came from, look inside a LEGO brick. Specifically the ones that are one stud deep like the 1×2, 1×3, 1×4 and so on. Following the granting of the LEGO brick patent in 1958, these bricks were given ‘pins’ to clutch the brick below, and these pins are fractionally less than the distance between two studs. (I’m not certain if these pins were always precisely 3.18mm in diameter, as LEGO clutch has been tweaked over the decades, but for simplicity’s sake I will call these 3.18s.) Here’s a pretty 1×2 brick (Design ID 3004) from 1976. 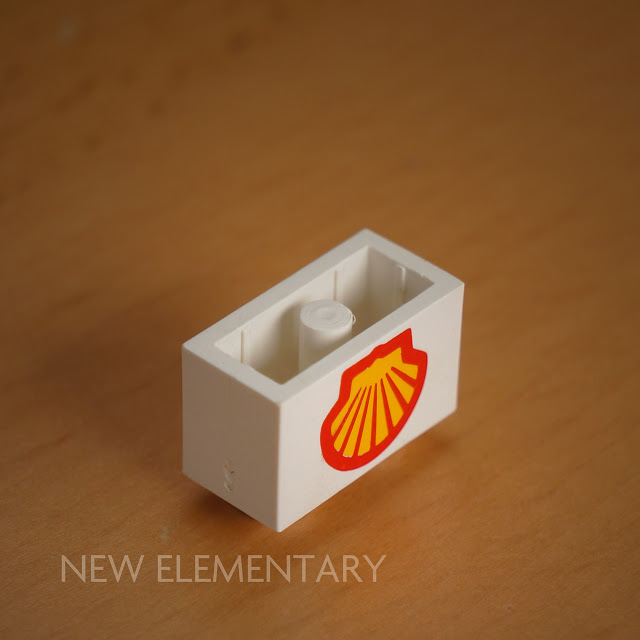 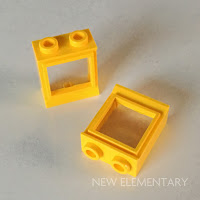 As all modern day LEGO builders know, 3.18mm bars can be inserted into a recessed stud. Recessed studs have been appearing within LEGO elements even longer than underside pins have – I believe since the window elements of the mid-1950s (such as this example, Design ID 7026, also dating from 1976) – but these older recessed studs cannot take a 3.18. The diameter of the internal recess of the stud is too narrow.

The same is true of other old parts with recessed studs that I tested, such as inverted slopes (shown here is Design ID 3660 in Bright Yellow [TLG]/Yellow [BL] alongside a modern one in Flame Yellowish Orange [TLG]/Bright Light Orange [BL]). I’ve not found definitive confirmation as to why parts were given recessed studs back then but it is likely to be for moulding reasons. In this case, I suspect that having full studs at the narrow end of the piece may cause dimples on the underside, spoiling the aesthetics of the sloped face.

READ MORE: Why did LEGO redesign all the arched bricks?

As far as I can tell, the first elements with recessed studs that could fit a 3.18 are Technic bricks, which first appeared in 1977. This makes sense; the Technic System was quite a redesign of the brick and embraced new possibilities for building. Having recessed studs on a brick means you can place a wider brick on top that is offset by half a stud. My surviving-yet-beaten-up childhood box of 871 Supplementary Set proves this is both possible, and intended. 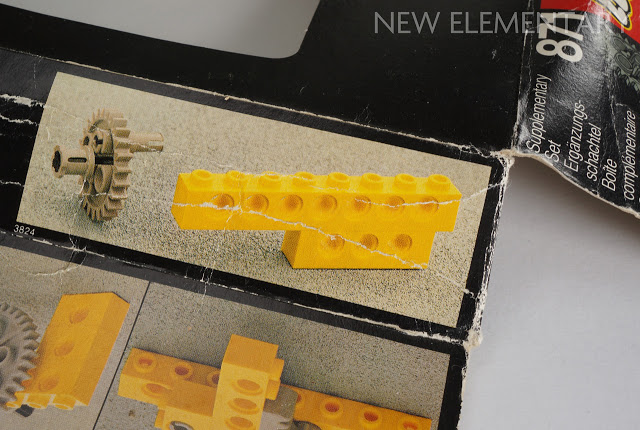 However this doesn’t prove that this was the sole or primary reason why Technic bricks were given recessed studs. Once again I haven’t found any certain evidence and it is quite possible that it was for a technical reason with the finer aspects to the Technic brick’s design or to allow for a smoother moulding process. Regardless of the reason, the genesis that led to the 3.18 connection family is perhaps here. 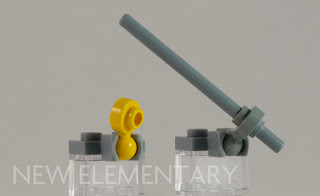 Aside from recessed studs, there are open studs which a 3.18 can be inserted all the way through however once again, it seems the older versions did not permit this. The maxifig hand from 1974 (Design ID 3614) did not originally fit a 3.18 but was redesigned to take a 3.18 in 1978 (listed as 3614b on BrickLink). BrickLink does list some 1977 sets as containing them but only as Alternate Items, which were probably versions of the set manufactured in 1978 or later. The same is true of the 1×1 round brick (3062 and transparent 30068) which was redesigned with an open stud (3062b). This was perhaps for reasons of child safety in case of swallowing. 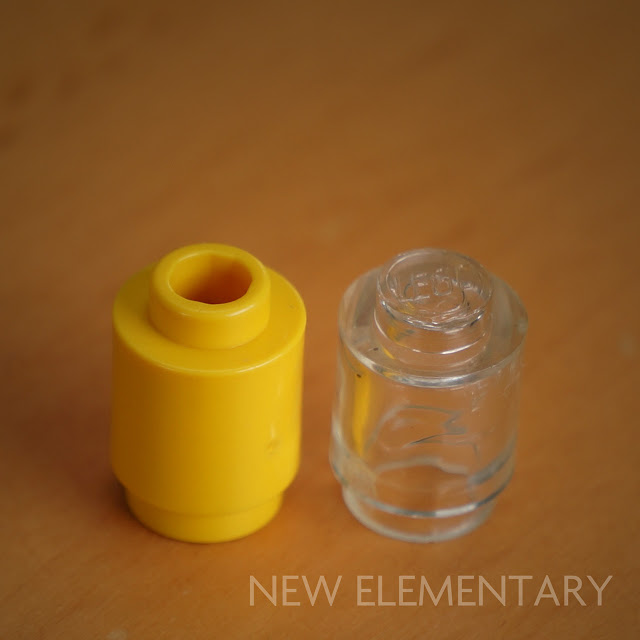 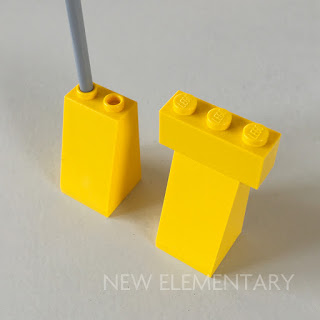 So it seems 1978 was an important year for 3.18s and a glance through BrickLink’s list of parts released in 1978 confirms this; many parts with recessed studs were introduced including the seminal 1×2 jumper plate (3794). I haven’t tested every 1978 part with recessed studs to see if they can take 3.18s, but those I have do. In most cases, fitting a modern-day 3.18 bar into a 1978 recessed stud is a slightly tight fit. However, as this picture shows, I also offset a 1×3 brick of 1978 onto the two recessed studs of a 2x2x3 75∞ slope brick (3684) of 1978, and it was a smooth fit. Finally I tried a modern-day 1×3 brick on the 1978 slope and again it was tight, perhaps suggesting the standard in 1978 was fractionally less than 3.18mm, both for the underside pins and the recesses in studs?

The importance of 1978 to the 3.18 connection family goes far, far beyond recessed studs, however. As I’m sure you recall, it was the year that the minifigure with moving arms and legs was introduced. I am certain no one could have predicted the varied and strange ways in which the minifigure would impact every aspect of the LEGO brand and its products, and the roll-on effects of their introduction into System. That said, LEGO designer Jens Nygaard Knudsen put an astonishing amount of thought into designing a characterful figure to exist within the rigid LEGO grid and the design of the hand in particular is extremely clever. Each measurement serves a purpose within System, for example the external diameter of the hand’s C-curve is (about) the same a stud, so it can connect to an antistud. The distance between the curve and the cuff of the arm is just enough to fit the underside lip of a brick. However it is the diameter of the hand’s internal curve that we are interested in here. It can hold – you guessed it – a 3.18, so a minifigure can grasp an underside pin. 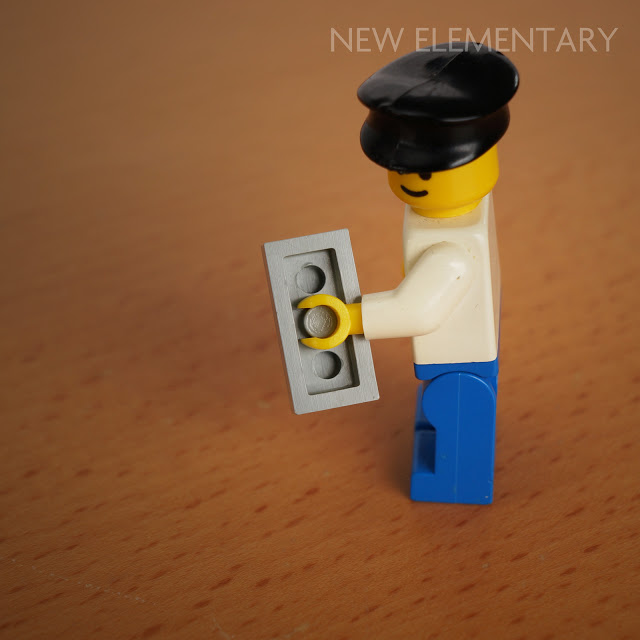 I’ve reverse-engineered Jens Nygaard Knudsen’s thought process as he designed the minifigure hand – in other words, this is pure conjecture! I imagine making the exterior of the C-curve the size of a stud was a relatively obvious design choice, and he then needed a slightly narrower dimension for the internal curve. Being a good designer he sought out an existing dimension within the System that he could leverage to some use, and found that in the diameter of underside pins. Either that, or the concurrent development of the Technic brick led him directly to this solution. 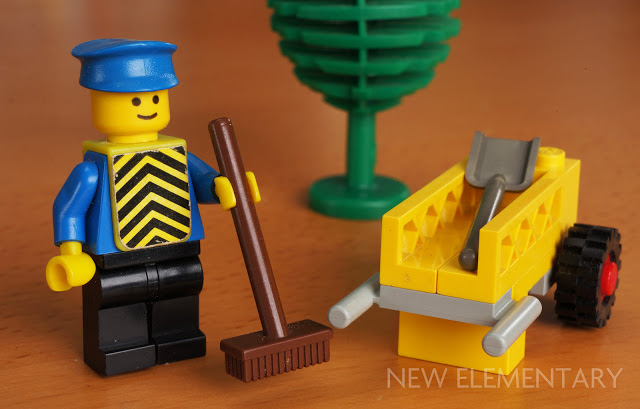 Either way, it naturally followed that the basis of all minifigure accessories would be a 3.18 bar. It’s worth making clear that although I’ve been talking about “3.18s” for this whole article, up until 1978 there were no parts based on 3.18 bars (that I am aware of). For example, old LEGO signs had axle-like poles (that snapped all too easily) and the bars of other accessories such as the Homemaker Hand Mirror / Indian Paddle were not 3.18mm in diameter, or even round in many cases. The first 3.18 bars appeared in 1978 in the form of shields, swords, halberds, axes, pickaxes, paddles and, most beloved of all to me, shovels and brooms which came in my first-ever set with a minifigure, 605 Street Crew (above). That set also contained a System piece with 3.18s that wasn’t an accessory; the 1×2 plate with handlebars (3839). The rolling-out of parts with recessed or open studs that also occurred in 1978 is presumably in response to the development of the minifigure accessory, rather than the Technic brick.

Along with more accessories, 1979 saw the introduction of another 3.18 part that also connected with studs: the antenna (3957). In 1980, two important parts with open studs appeared: the 1×1 headlight ‘Erling’ brick (4070) and the 1×1 plate with clip light (4081, shown below in Grey and Bright Blue [TLG]/Light Gray and Blue [BL]. The wider ones are the redesign from 1983). Erlings and clip lights are more famous as SNOT parts that allow sideways building but this doesn’t negate the fact that fixing a 3.18 sideways was also an exciting development.

A ‘chicken-and-egg’ story developed naturally; when minifigures weren’t holding their accessories, they needed somewhere to secure them which might explain why a 3.18 clip was introduced to the family in 1980: the 1×1 plate with a vertical clip (4085). Unlike parts with bars, which proliferated in the LEGO inventory, parts with clips were slow to be added. Other developments such as 3.18 flex tubing further expanded the possibilities the family offered. In 1999, Star Wars gave us what is perhaps the purest 3.18 of them all: the lightsaber (30374). 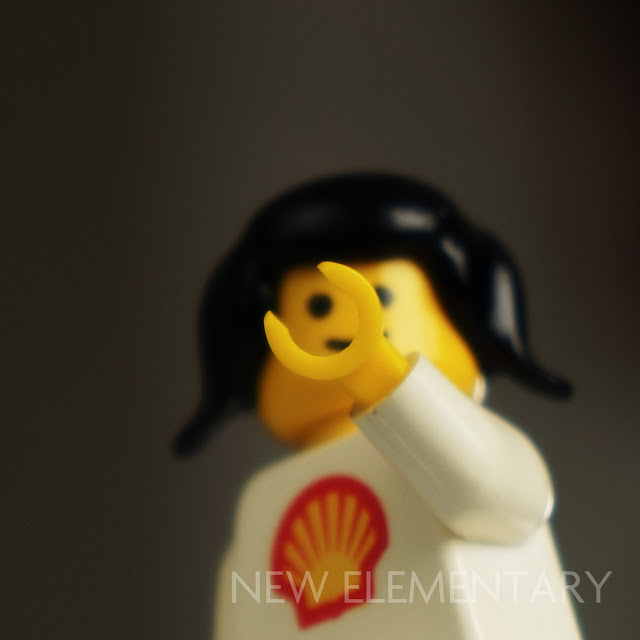 And so it feels as though the 3.18 connection family developed almost unnoticed in the background. A lot more research would be needed to pinpoint when its importance truly emerged, for example “finger” hinges (e.g. 4276) came and went and the bar/clip connection proved to be the logical way forward. Undoubtedly, this year’s introduction of the hinge that Huw has used has further assured the LEGO Group’s commitment to the 3.18 connection family.