The Portuguese LEGO Users Group (PLUG) is planning an event called An Adventure in the World of LEGO, an exhibition held in Lourinhã, Portugal from April 27 – May 3. 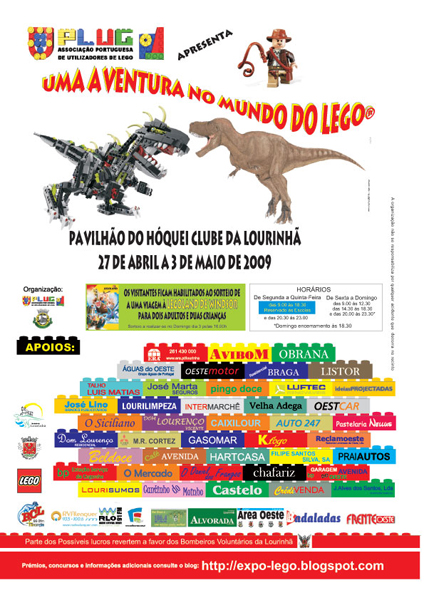 PLUG (Portuguese LEGO Users Group) will organize a major Exhibition – “Uma Aventura no mundo do LEGO” (An Adventure in the World of LEGO).

It will be held in Lourinhã, 63km northwest of Lisbon, in a Hockey Club Pavilion (something like 8.600 sqf or 800 sqm), between April 27th and 3rd of May, 2009.
Lourinhã is also know for its Jurassic findings and is considered as the Dinosaurs capital in Portugal. Thus the inspiration for the event poster and some exposed dioramas.

From Monday until Thursday, between 9am and 6pm for schools – it is expected that the event will attract around 5,000 young attendees – and between 8:30pm and 11pm, for general public. Friday and Saturday, between 9am and 11:30pm. Sunday, between 9am and 6:30pm.
PLUG will present more than fifteen thematic tables of MOCs and LEGO Sets, including City, Town´80s, Star Wars, Western, Adventurers, Castle, Classic Space, Model Team, Creator, Bionicle and TECHNIC.

Besides the exhibition, there will be numerous activities, like several types Sets building and contests between PLUG members or visitors.
In the end, there will be also a trip to LEGOLAND Windsor for two adults and two children, to raffle among visitors.

Just for you to know, Portugal is a country on the Iberian Peninsula, the westernmost country of mainland Europe and is bordered by the Atlantic Ocean to the west and south, and by Spain to the north and east.