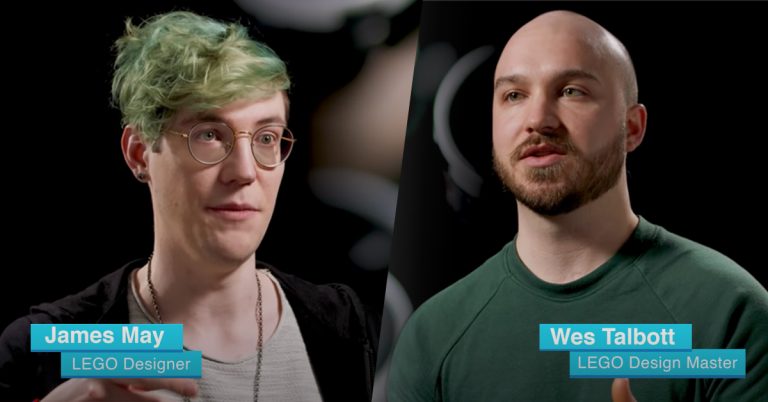 END_OF_DOCUMENT_TOKEN_TO_BE_REPLACED

LEGO unveils yet another life-size sports car to add to their collection: Lamborghini Sián FKP 37. The model is made of more than 400,000 Technic pieces and weighs 2,200 kg. The model was created by 15 engineering and building specialists and took a total of 8,660 hours to develop and construct. To create it, 154 different types of LEGO Technic elements were used, and 20 of them were moulded just for this model.

END_OF_DOCUMENT_TOKEN_TO_BE_REPLACED

What does NASA Jet Propulsion Laboratory engineer Stephen Pakbaz do for fun when he’s not working on real-life Mars vehicles? Well, it turns out he builds Mars vehicles in LEGO. Here is a 1:1 scale, motorized model of the Ingenuity Helicopter that spans about four feet (1.2 meters) across. In case you’ve been living under a meteorite this past month this craft has made headlines with a number of historic flights.You can keep up with the latest real-life shenanigans of the helicopter on Mars on Nasa’s official website. As for LEGO-life shenanigans, you may notice that Stephen has also built the Ingenuity a leeetle friend in 1:3 scale. That one he has launched on LEGO Ideas in hopes of gaining the votes needed to maybe make it an official set at some point. This isn’t Stephen’s first orbit with LEGO Ideas. He was successful in turning the Curiosity Rover into an official set back in the early days when LEGO Ideas was called Cuusoo. Check out our interview from 2013. 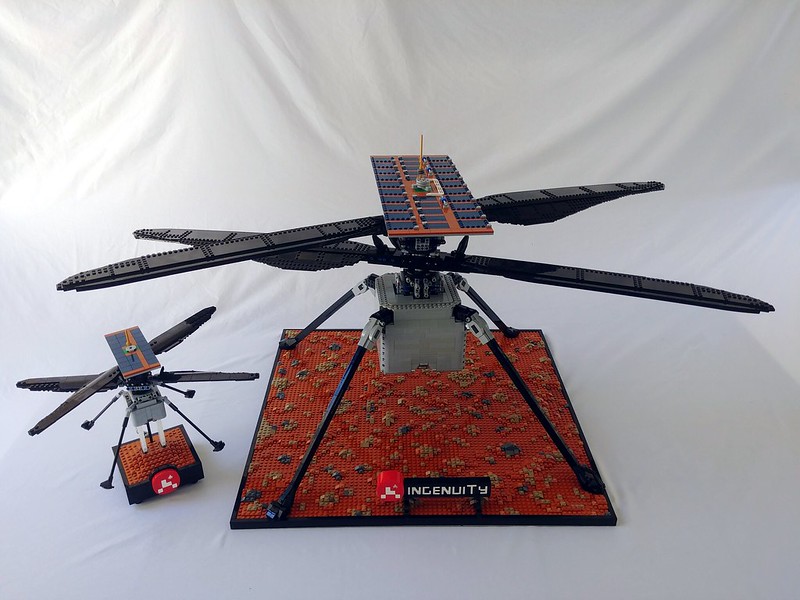 What do you do when you really want a plush LEGO Baby Yoda but can’t seem to justify it? Do what Simon Liu did – buy it anyway and build a to-scale cradle to go with it. Of course, you might need some other hard-to-find LEGO elements like sails from Jabba’s barge, but it’s a small price to pay for an upscale ride for your snuggly little pal. 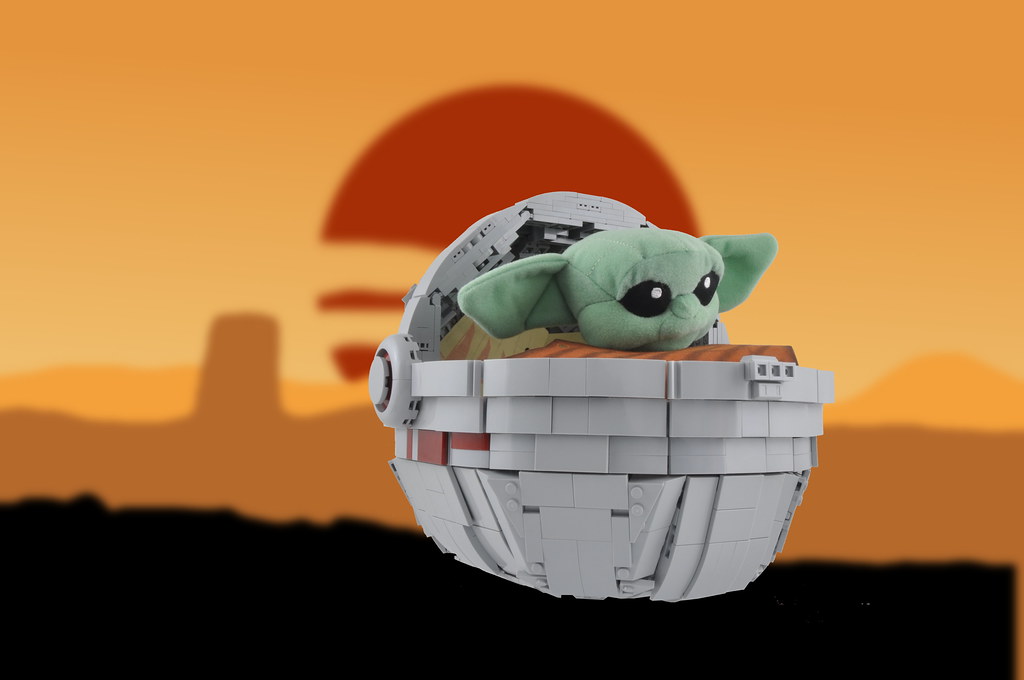 This isn’t the first Baby Yoda build we’ve featured, and I’d be shocked if it was the last. And hopefully, we’ll see more that make use of the plush version of the character. Surely someone is working on a Razor Crest that’s to scale, right? (Well, we can dream.)

A while back IKEA released a line of LEGO-compatible storage boxes. We’ve seen some creative builds based on them before, but this creation by Chi Hsin Wei (LEGO7) is a little sus. Sorry, I mean “fishy”.  The white IKEA box makes for a perfect insulated container, transparent 1×1 brick makes realistic ice, and metallic silver tile and slopes add just the right sheen to the saury. The brick-built sign with pricing really elevates the build, giving everything context and letting you imagine visiting your favorite fish-monger for the catch of the day. 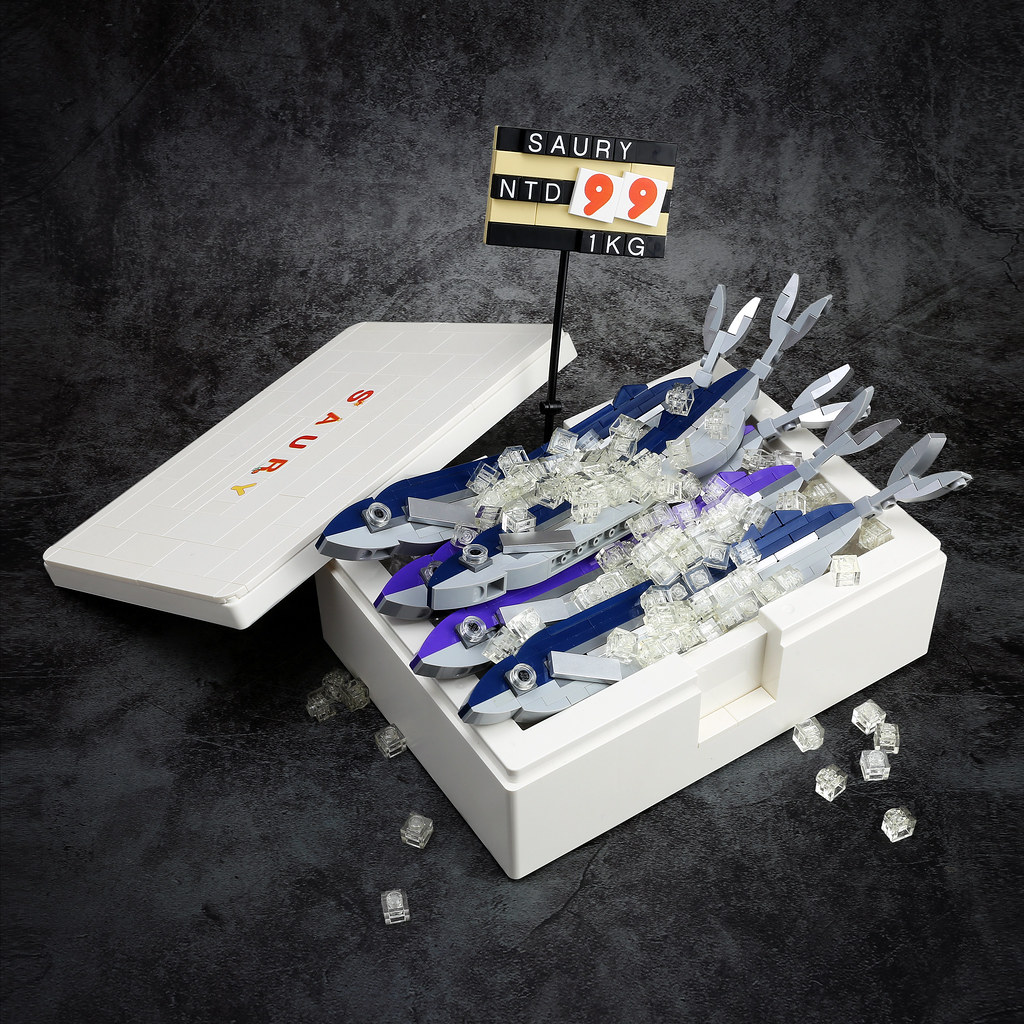 I don’t want to carp on about what a great build this is forever, so I suggest you go check out some other featured fishy builds.

There’s an old adage I’ve heard somewhere about life being like something or another but damned if I can remember it now. Sometimes the ol’ reptile brain is not as responsive as it used to be. Maybe it’ll come to me at some point. Anyway, for unrelated reasons, here’s a LEGO box of chocolates built by Kale Frost. It’s amazing that you can make LEGO look so tasty and decadent. The sheer variety of chocolate treats here can be written into some kind of clever analogy or another but I’ll leave the creative thinking to you. While you’re mulling that over, here are the other times we’ve been totally smitten by something Kale has built. 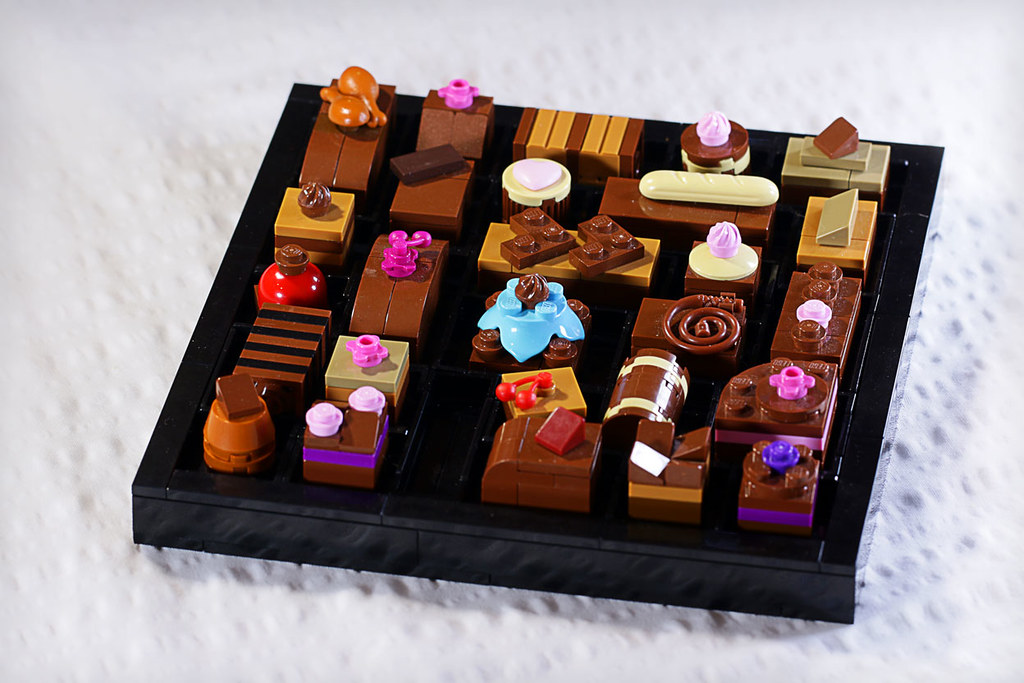 I was an avid model kit builder as a teenager and young adult. There’s one hobby that brought my model building days to an abrupt end and that involved the rediscovery of LEGO. Still, it’s neat to see a builder like Kale Frost illustrate the love for my old hobby with pieces from my newer one. The cutting mat, paint tubes, pencils, the Exacto blade, even the plastic parts on the sprue are all built from LEGO. With sanding, gluing, and painting there certainly were a lot of steps involved in building models. I still have a few kits in my art room closet. Perhaps this might inspire me to rediscover the hobby. If not, it at least provided fond memories of building models in the basement while listening to my parents’ Black Sabbath tapes. Yes, I said tapes! And Black Sabbath. And parents. 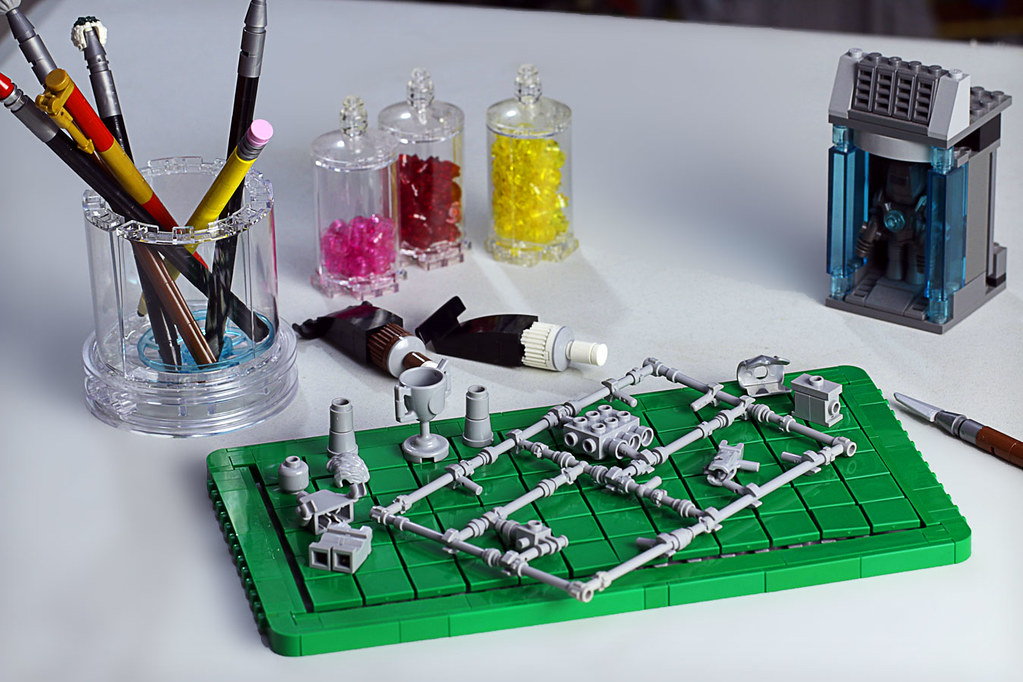 When I look out my window today, there’s snow on the ground. It’s been a long, cold winter already, and I’m starting to really miss the color green. If the drab snows of winter are getting you down, too, here’s some welcome relief. Stilly Bricks collaborated with Jonathan Lopes to create a 45″ inch tall, 18″ diameter topiary wonder. It’s so massive that it required a metal bar through the stem to support the flowers, and even the vine has a metal tube running through it.  From the brick-built pot and leaves to the varied flowers in the ball, this is one creation that should make any plastic-loving botanist smile. 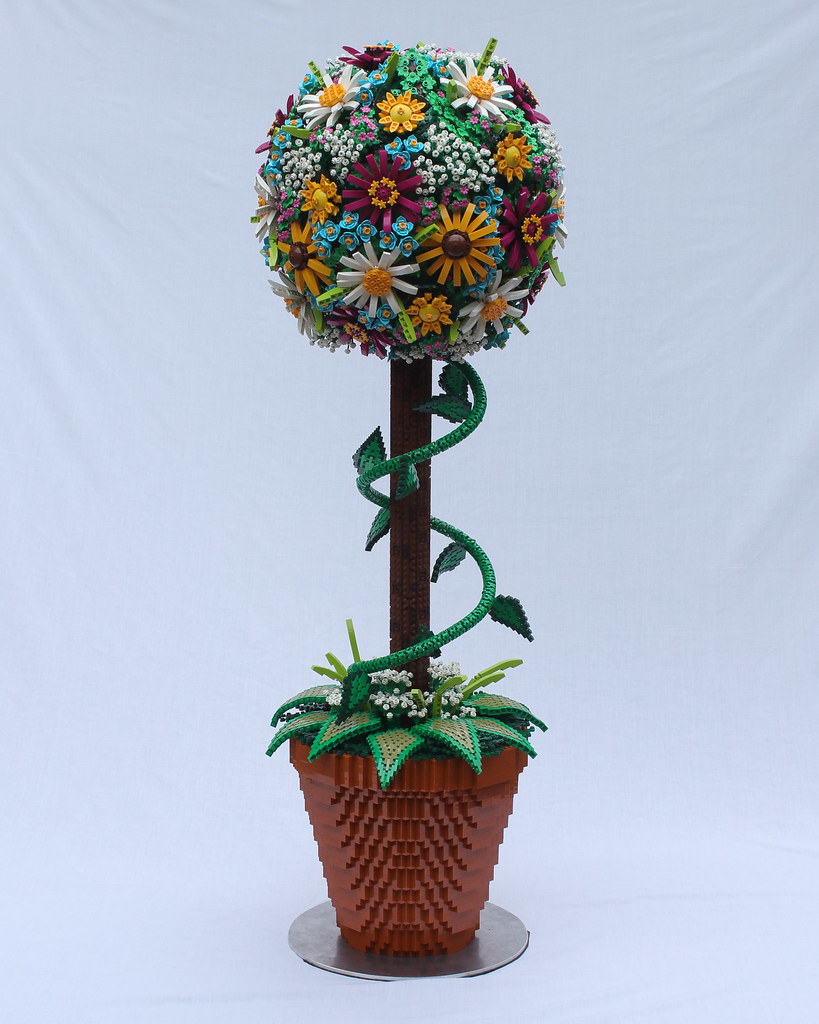 If you like LEGO flowers (and really, who doesn’t?) then be sure to check our archives for more leafy goodness!

LEGO bricks are used to make stuff, sure. But when LEGO bricks are used to make stuff that makes stuff…that’s a different level of meta. SephiMoc FF7 has created some painting supplies that do indeed look ready to be applied to canvas. I like how they’ve used different building methods to show the pooling paint, but it’s the brushes that make me smile most. We’ve seen minifigure brooms and plumes as brush tips before, but this may be the first time I’ve seen both a banana and carrot in play as well. I do kind of feel bad for the table, though. That’s a lot of messy spillage to clean up. 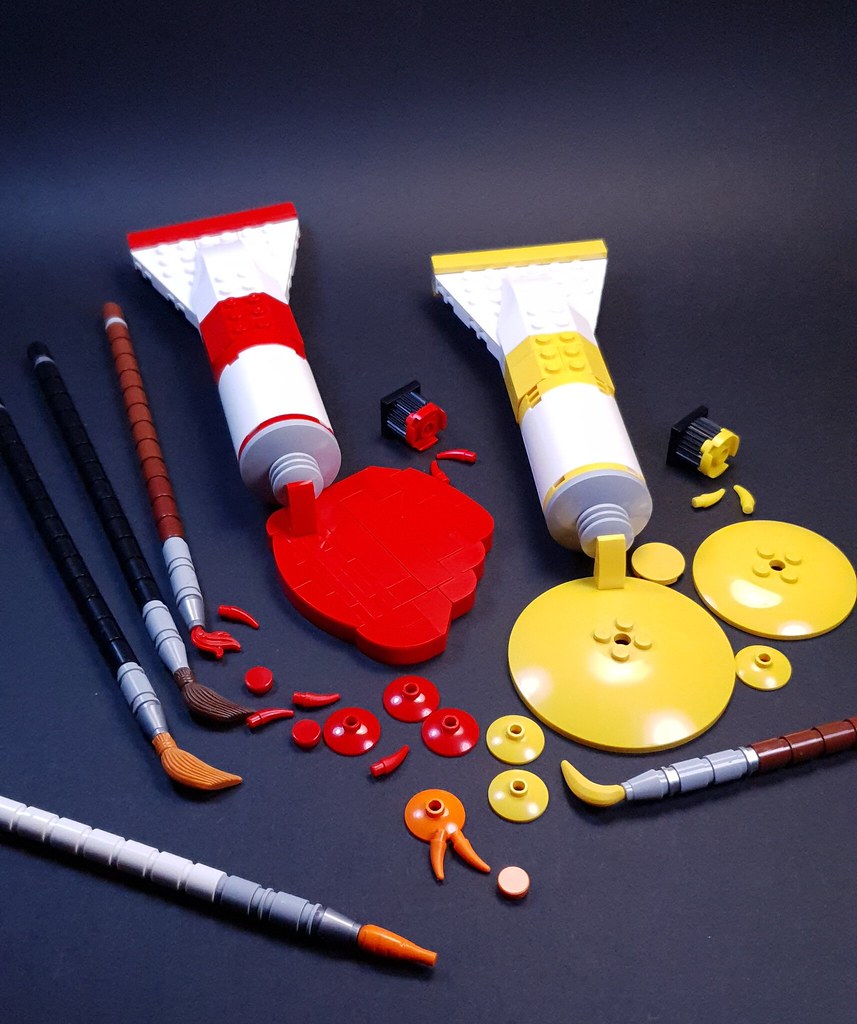 If you’d like to see a different design for paint tubes, I found a gem in our archives.

The Gibson Les Paul was one of the first mass-produced solid-body electric guitars. There are a lot of versions and editions, but this is the first time I’ve seen one made out of LEGO, at least at a 1:1 scale. Builder morimorilego has paid close attention to realism in this reproduction of the “Les Paul Standard”. The body is decked out in layers of red, orange, and yellow tile and brick, with the pickguard standing out in vibrant white. Golden dishes and transparent yellow 2×2 round brick are used for the control knobs, and the output jack is courtesy of a system wheel rim. Those details complement the work done in the neck and headstock, which help make this build feel like it’s ready to play. 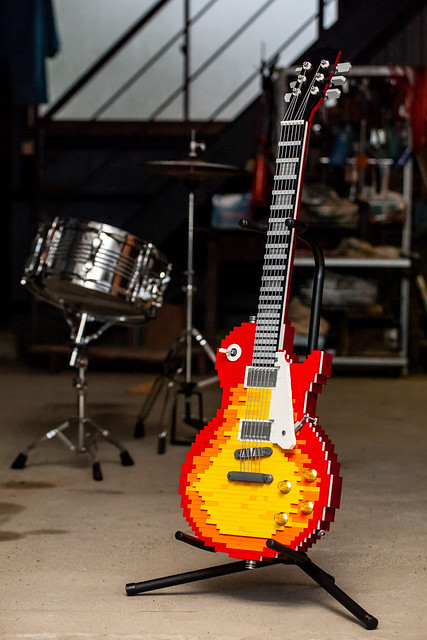 END_OF_DOCUMENT_TOKEN_TO_BE_REPLACED

The Fujifilm X100 Series is an iconic camera line, and builder John Huang has given it an equally iconic LEGO treatment. Curved slope tiles in grey and black give the housing clean edges and lines. A minifigure frying pan makes a great stand-in for the viewfinder selector switch, and a Technic gear forms the shutter speed dial. 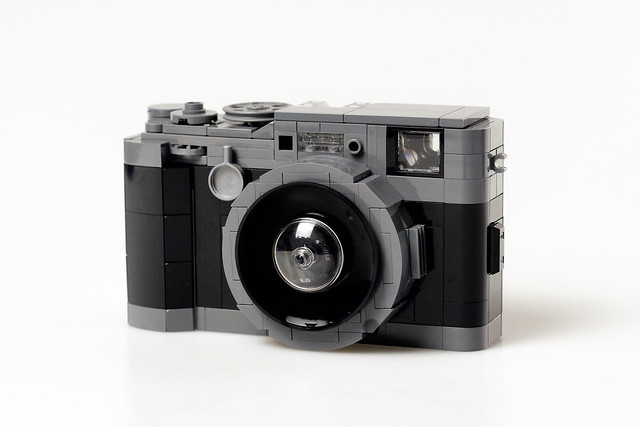 As nice as those details are, the viewfinder on this one is really a cut above. It’s also cool to see the lens housing rotated and sitting at a tilted angle; it makes this feel even more like a functional piece of camera equipment. I’m just loving all these 1:1 scale LEGO cameras lately, but this one makes me particularly happy. 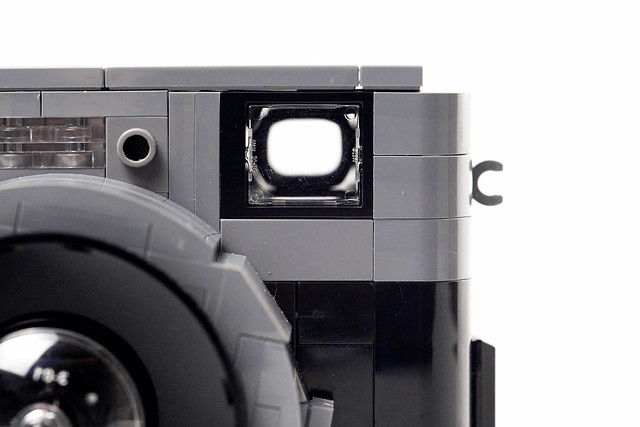 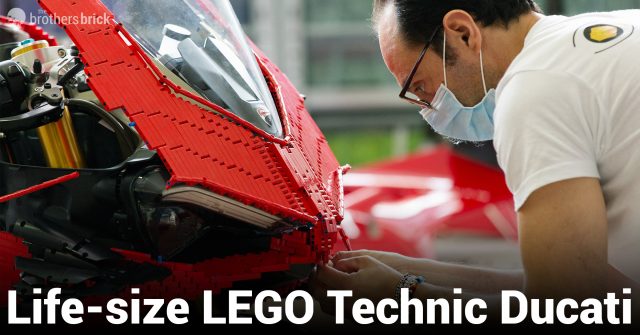