“We are the best kept secret in the galaxy. We monitor, licence and police all alien activity on the Earth. We’re your first, last, and only line of defense. We live in secret, we exist in shadow.” 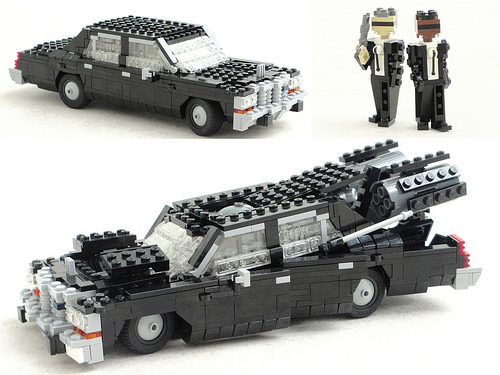 Men in Black is a 1997 hit movie starring Tommy Lee Jones and Will Smith as agents ‘K’ and ‘J’, who are part of a secret US government organisation that deals with extraterrestrials living on Earth. Their standard mode of transport is a nondescript black Ford LTD, called a Ford P.O.S. by ‘J’, that turns into a gravity-defying rocket ship at the push of a red button.

I’ve been meaning to add this vehicle to my collection of cars from movies and TV series for a long time, but I didn’t want to build a boring black sedan unless I could make it transform. In the movie this was done using CGI and, to my knowledge, there are no transforming toy versions of the car. This made recreating it in the real world a bit tricky. However, after Optimus Prime I felt fairly confident I could get it to work, albeit with a bit more fiddling than merely pushing a little button. I also decided to post the model only after I made the video showing the transformation sequence.